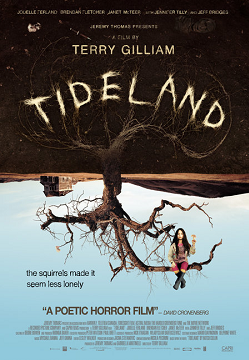 Tideland is a 2005 fantasy/comedy/drama/horror film directed by Terry Gilliam. It is based on the novel of the same name by Mitch Cullin.

Jodelle Ferland plays Jeliza-Rose, a spritely young girl with negligent, drug-addicted white trash hippie parents. Her only friends are the severed Barbie doll heads she wears on her fingers. After her mother (Jennifer Tilly) dies of a drug overdose one night, she and her father Noah (Jeff Bridges) flee to Noah's mother's farm in the countryside of Texas. Finding it abandoned, they settle in anyway. Noah himself dies of a drug overdose on the first night. But because Jeliza is used to her parents being unconscious for long periods of time, she doesn't realize this and she leaves him upright in his armchair, slowly decaying, for the course of the film.

Jeliza spends the days wandering about the estate with her doll's head companions and begins slipping into a dark, hallucinogenic fantasy. She encounters two backwoods neighbors: the mentally disabled Manchild Dickens (Brendan Fletcher), and his older sister Dell (Janet McTeer). Dickens dresses in a scuba outfit and is obsessed with destroying a "monster shark" he believes is stalking the estate (actually a train). Dell burned her father's beehives after they stung her mother to death and now believes all bees in the world harbor a personal vendetta against her. The two take Jeliza under their wing (in a sense), going so far as to preserve Noah's body through taxidermy. Dickens and Jeliza slowly develop their own kind of Puppy Love, while Dickens continues planning to destroy the train.

Because of the unconventional nature of the film and some scenes of romance between a young girl and a mentally disabled adult, the film's release was extremely limited and it scarcely turned a buck. Critical reception to it generally tended to be polarizing too. Nevertheless, it was a box office hit in Japan and won the FIPRESCI Prize at the San Sebastian Film Festival.

Compare Alice in Wonderland (which the film references), The Fall, and Pan's Labyrinth.