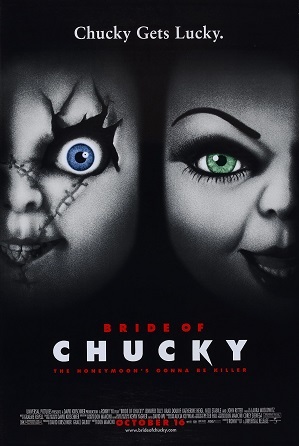 The fourth film of the Child's Play series is actually a horror comedy, with an emphasis on comedy.

The Chucky doll has been destroyed and Charles may be gone for good. However, his former lover and accomplice Tiffany (Jennifer Tilly) has other ideas. She crudely stitches Chucky's remains back together and reenacts the voodoo ritual which instilled Ray inside the doll a decade ago. Charles is successfully revived. Tiffany at first makes fun of his condition and torments him. He retaliates by killing her body and transferring her soul to a female doll. Now they both need new bodies and local teenage rebels Jade (Katherine Heigl) and Jesse (Nick Stabile) seem good candidates. Meanwhile Charles and Tiffany explore their mutual feelings of love, lust and hate for each other.