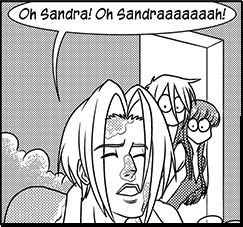 Some things can't be un-seen. Or un-heard.
Advertisement:

AKA the male orgasm.

While women situate themselves between The Modest Orgasm and The Immodest Orgasm, due to the Double Standard, males are usually not shown climaxing on screen/panel. Or it's very brief.

When a male is shown experiencing a particularly intense climax, he generally can't control himself either and utters grunting sighs and growls instead of the more typically female yelps and squeals. It can go up to an utter scream but that's rare. It is often accompanied with a gritty or silly face, rolled eyes, clenched teeth, and foretold by naughty words and sweat. Is sometimes featured/parodied in Orgasmic Combat.

Compare/Contrast The Modest Orgasm and The Immodest Orgasm. Can be Truth in Television, though it is sometimes exaggerated in fiction to make the hero seem macho.