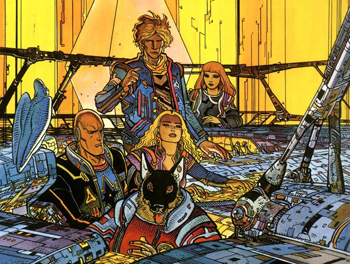 The Incal (L'Incal) is a sci-fi comic series by writer Alejandro Jodorowsky and artist Mœbius and is the center-piece of the former's Metabarons Universe. The project was born out of, and recycled many concepts from, the two's failed attempt to make a film adaption of Dune. Despite Jodorowsky having every major event of the comic planned out beforehand, and the series only being 6 volumes long, it took 8 years to complete.

John Difool is a low-ranking private investigator in the slums of the dystopian planet Terra 2014. After escaping the aftermath of a butchered job, he encounters a Berg, a member of an once imperial alien race that has now passed into myth. The Berg reveals that it had been looking for him and entrusts him with a mystical object, the Light Incal. This naturally makes Difool the target of multiple interplanetary factions that seek to use the artifact's powers for their own goals, not the least of which include the Incal itself.

A 6-part prequel Before the Incal (Avant l'Incal), detailing episodes from Difool's life prior to the events of The Incal, was published between 1988 and 1995. It was illustrated by Zoran Janjetov in a style very similar to Moebius'. (Although the recoloring of the first, censored English release gave it a more distinct look). A sequel to both the original Incal and Before, entitled After the Incal (Après l'Incal), began in 2000 with Moebius back as artist, but the series only lasted one volume before it was discontinued. The project was rebooted with Mexican artist José Ladrönn (Elephantmen) in 2008 as Final Incal and finished with 3 volumes in 2014.

For other spin-offs and related media see: the Metabarons Universe.

The Incal provides examples of: