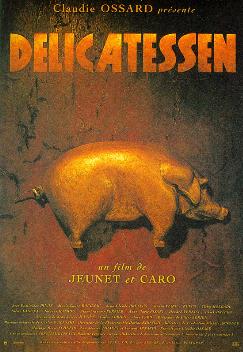 Delicatessen is a 1991 French Black Comedy directed by Jean-Pierre Jeunet and Marc Caro.

The story is set in a post-apocalyptic apartment building in a France of an ambiguous time period, and focuses on the tenants of the apartment building and their desperate bids to survive. The protagonist, a former circus artist named Louison, arrives to replace a tenant whose reason for departure is initially unclear. However, it is gradually revealed that the building owner, Clapet, is luring unemployed people to murder them and use them as a source of food for his tenants. Louison's only hope for salvation is Julie, Clapet's daughter who doesn't agree with her father's actions and is also in love with Louison, and a vegetarian rebel group known as the Troglodistes who agree to help Julie rescue Louison in exchange for Clapet's grain stores.

Not to be confused with Delicacy.