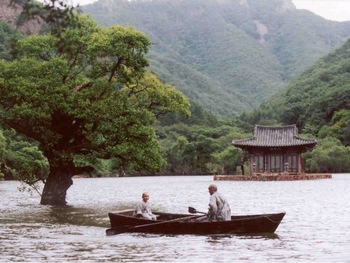 Spring, Summer, Fall, Winter...and Spring is a 2003 South Korean film directed by Kim Ki-duk, about an old Buddhist monk who lives in a small floating temple on an isolated lake. He lives simply, maintaining the modest, yet ornate temple, keeping a few pets, and raising a small boy to be a monk like him.

The movie cycles through the seasons in the same order as the title. The seasons cover not one year, but several, each devoted to a different time in the boy's life: boyhood, teenage years, young adulthood, adulthood, and old age. With each division, the younger monk learns new life lessons, often the hard way, until he eventually finds peace in the simple life his master originally laid out for him.

As the plot is rather spoiler sensitive, it is recommended you watch the film before reading the examples.