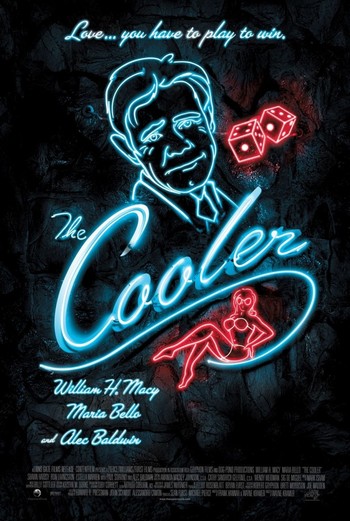 "When your life depends on losing... the last thing you need is lady luck."
— Tagline
Advertisement:

Unlucky Bernie Lootz (Macy) has little going for him: He lives in a dreary studio apartment in a rundown motel on the Las Vegas Strip, he's indebted to Shangri-La casino boss Shelly Kaplow (Baldwin), who years earlier cured him of a gambling habit by destroying his kneecap, and he can't recall the last time he had physical contact with a woman.

Bernie's success as a "cooler" (he is so unlucky that he breaks other people's winning streaks just by standing close to them) is jeopardized when cocktail waitress Natalie Belisario (Bello) seemingly takes an interest in him, and his luck — and that of those around him — takes a turn for the better. What Bernie doesn't know is that Shelly has paid the woman to seduce him into staying in town. What Shelly doesn't know is that Natalie actually has fallen in love with Bernie, and vice versa.