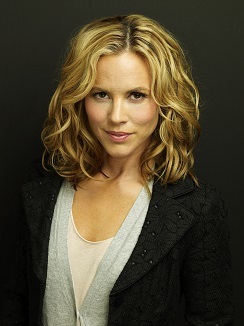 "You serve the best by doing what you love the most."
Advertisement:

Maria Elena Bello (b. April 18, 1967 in Norristown, Pennsylvania) is an award-winning American actress best known for her roles in Coyote Ugly, ER, The Jane Austen Book Club, and A History of Violence. She currently stars as Special Agent Jacqueline "Jack" Sloane on NCIS.

A Pennsylvania native, Bello earned her degree in political science from Villanova University before turning to acting, honing her talents in New York theater productions. She made her television debut in 1996 in the short-lived crime drama Mr. & Mrs. Smith opposite Scott Bakula, and shortly thereafter joined ER as Dr. Anna Del Amico for its fourth season. Her film debut came in 1998 in Permanent Midnight, but it was 2000's Coyote Ugly that truly put her on the map, and she has been working steadily in both film and television ever since. Most recently she joined the long-running crime drama NCIS beginning with its 15th season, starring as operational psychologist Special Agent Jacqueline Sloane.

Despite having something of a reputation as a Ms. Fanservice, she's also noted for being one of the most fearless actors in the business, not self-conscious about the way she looks on film and unafraid to explore even the darkest corners of the human psyche (see, for instance, the harrowing Downloading Nancy). Her earthy, grounded acting style and her aforementioned fearlessness have earned her rave reviews from many notable critics — including Roger Ebert — as well as a passel of nominations and wins from, among others, the Screen Actors' Guild, the National Society of Film Critics, and the Hollywood Foreign Press.

She is openly not-straight (in her own words, "a 'whatever'"), coming out of the closet in a New York Times editorial in 2013 about her relationship with Clare Munn. Also an author, she published a memoir, Whatever... Love is Love: Questioning the Labels We Give Ourselves, in 2015.

Finally, she's an avid practitioner of Muay Thai, a no-holds-barred form of kickboxing from Thailand.

Bello has a son with her ex-boyfriend Dan Mcdermott. She got engaged to Dominique Crenn in 2019.