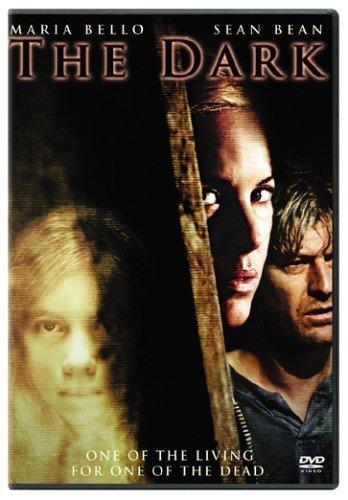 "She has found a way to return from death. But, something came back with her."
Advertisement:

The Dark is a 2005 British horror film directed by John Fawcett, based on Simon Maginn's 1994 novel Sheep.

In this film set in Wales, bratty teenager Sarah (Abigail Stone) and her mother, Adele (Maria Bello), visit her dad, James (Sean Bean). Due to an unintentional moment of abuse at Adele's house, Sarah now hates her mother and wishes to live with her father.

Whilst staying with James, Adele and Sarah learn of "Annwyn", the Welsh equivalent of the afterlife, and how a cult led by a man known as the Shepherd who all committed suicide under the belief that it was a better life in the next world. However, mysterious things start to occur, like the local flock of sheep begin to jump off a cliff to their deaths, and Sarah disappears without a trace, believed to have died. As Adele frantically tries to find out why her daughter has gone, a Welshwoman named Ebril appears—the only catch is that she has been dead for 50 years.

Now with only a Skeleton Key, a Stringy-Haired Ghost Girl and the all-knowing local sheep shearer for guidance, Adele races to find Sarah, the answers possibly lying in Annwyn.

The Dark provides examples of: