Film / A History of Violence 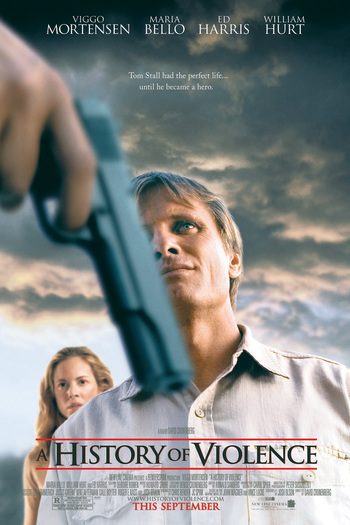 A History of Violence is a 2005 crime thriller directed by David Cronenberg and written by Josh Olson, based on a 1997 graphic novel by John Wagner and Vince Locke.

Tom Stall (Viggo Mortensen) is an average family man, happily married to the loving Edie (Maria Bello) and a father to the teenaged Jack (Ashton Holmes) and the young Sarah (Heidi Hayes). He lives a mild-mannered life in the small town of Millbrook, Indiana, where he works as a universally well-liked restaurant proprietor and is satisfied with his lot.

The humble existence of Tom's family comes crashing down one night when he defends himself, his customers and his friends against two armed robbers who enter his diner. The act wins him the admiration of the townsfolk and the press as an "American hero", but the widespread attention proves the last thing a simple man like Tom would ever want — for more reasons than the newfound celebrity status.

The coverage surrounding Tom leads to the arrival of mysterious people who firmly claim to have unfinished and less than amicable business with him, and as their insinuation into his life progresses, the safety and relationships of his family are put more at risk.

Being a Cronenberg film, it's not for the squeamish, though it does feature a somewhat more grounded setting and less overtly bleak tone than most of his movies. The violence is also contained into several surprisingly short parts of the movie, which helps to make it more effective.

Holds the distinction of being one of the final Hollywood films released on VHS. Contrary to what some sources say, it actually wasn't the last — that honor later went to a rare Disney Movie Club print of Cars, but nevertheless, A History of Violence remains the last major Hollywood film with a wide release on VHS.

How do you fuck that up?!

Richie executes one of his wounded henchmen after failing to kill Joey, despite the henchman having a clear opportunity on an unaware opponent.

Alternative Title(s): A History Of Violence

How do you fuck that up?!

Richie executes one of his wounded henchmen after failing to kill Joey, despite the henchman having a clear opportunity on an unaware opponent.