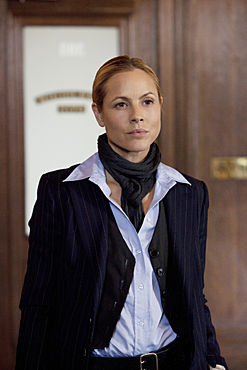 She's a homicide detective, thank you very much.
Advertisement:

The US version of Prime Suspect, starting in 2011. It stars Maria Bello as Detective Jane Timoney (Tennison in the UK version). The series shares some of the same themes are the original (including the sexism Jane faces in the workplace), but manages to put its own spin on things so far.

Detective Jane Timoney is a homicide detective. There's bad blood with her fellow detectives, since they think she was able to get a promotion by sleeping with her boss. Thus, whenever a case should go to her, it always seems to get picked up by a different squad. When the detective in charge of the squad suffers from a heart attack and dies, however, she gets her chance to show how she does things.

The US version of Prime Suspect includes: