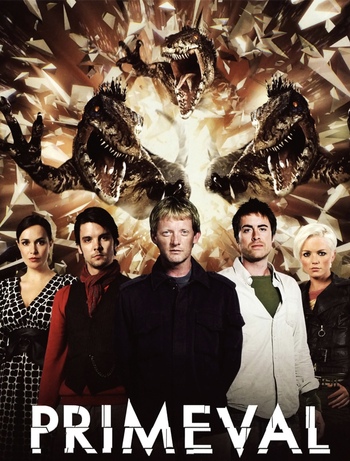 Lester: You're aware of the work we do here?
Becker: You detect anomalies and fight dinosaurs, when necessary.
Advertisement:

involves a group of crack scientists and experts note Well... depending on your series, a paleontology professor, his TA, one of his students, an ex-zookeeper, an SAS guy, and a couple of Home Office boffins; or an ex-copper, an archaeologist, a PR lady, the student and the zookeeper, the Home Office guy and an Army guy; or a time-traveling ex-army guy, the student, the zookeeper, the army guy, now ex-army and with a shiny new guilt complex, a computer whiz and the Home Office guy, and occasionally a time-traveling Victorian Lady. protecting modern Britain from trans-temporal threats. These mostly consist of extinct, usually prehistoric, beasties trolling around the South of England after coming through magnetic time portals known as "anomalies".

Actual dinosaurs other than birds didn't appear until the second season (despite the show being often initially billed as Torchwood with dinosaurs); Season One focuses primarily on the more ancient time periods, with some dodos, a pterosaur, a sea reptile, and a predatory creature from the future thrown in for flavor. In the later seasons, some completely fictional prehistoric species (justified, since only a small fraction of species have been discovered) and more future creatures appear along with the dinosaurs.

The series launched in 2007 and ran for three seasons until its cancellation in 2009 due to budget problems. Two years later, it was revived and ran for two more seasons, the last of which ended in late 2011. Adrian Hodges, Primeval's co-creator, claims that a sixth series will someday be made, but that they must wait for commitment from a major network.

A Darker and Edgier Canadian spinoff, Primeval: New World, started broadcasting on Space Channel on October 29th and aired on Syfy (and was added to Hulu) in early 2013. An American Big Damn Movie (currently in Development Hell) was also announced. Unfortunately, New World was cancelled in February 2013.

Episode Guide pages for both the main show and New World have started.