Going for the Big Scoop 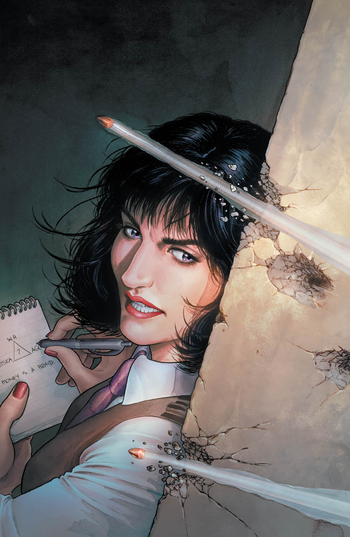 "This is great! I must really be onto something hot if they're trying to kill me!"
— April O'Neil, Teenage Mutant Ninja Turtles
Advertisement:

Some people are thrill seekers, nothing wrong or unusual with that. Still, even Bungee jumpers wear harnesses, and Great White photographers dive inside of titanium cages. Not so with the Intrepid Reporter. While Going for the Big Scoop they will ignore, nay, actively run towards danger to find whoever or whatever is causing it.

It's not that they're Too Dumb to Live — they knowingly choose to take these risks... perhaps because they know the hero will swoop in and save them if they get in enough pointless danger. Extra points if after being rescued and admonished by the hero to get to safety, the first thing they do is run towards the same danger they had to be rescued from again!

Certain amount of Truth in Television; war correspondents have a bit of a reputation for being danger and adrenaline junkies. The School Newspaper Newshound can often do this in series combining high school students with high danger.

May result from "I'm Going for a Closer Look". If they don't have main character status, inevitably becomes Deadline News - but any character like this will be satisfied that even if you kill them, you Can't Stop The Signal. Often, the big break in the case may come from unconventional sources...

Note to those putting up examples: This trope is about reporters. Only reporters.