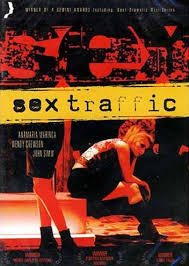 Kernwell Industries, a US defense contractor, is thrust into the public eye when Sergeant Callum Tate is caught attempting to purchase a 17 year old prostitute in Sarajevo. He claims that he was trying to save her, not take advantage of her, and that he witnessed Kernwell peace-keepers involved in sex-trafficking. Eager to prevent any further scandal and a possible loss of future contracts, his claims are dismissed and he is unceremoniously discharged. The story goes on to revolve around two Moldovan sisters, Elena and Vara, who unwittingly become victims of a sex-trafficking ring. John Simm plays Daniel Appleton, a bashful but determined investigator for a London non-profit organization, whose attempts to uncover the truth behind Kernwell's involvement lead him to Elena.
Advertisement:

The programme also focuses on the wife of the the CEO of Kernell, who through her efforts to fund shelters for trafficked woman stumbles across the cover-up.

Sex Traffic was broadcast in two parts in 2004 on UK's Channel 4. It was directed by pre-Harry Potter David Yates.