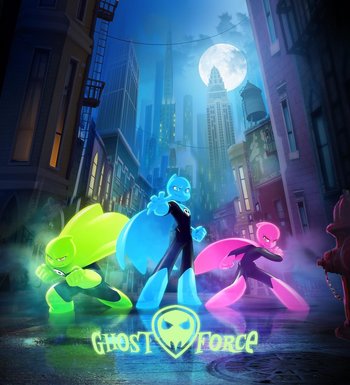 As a boy, Professor Richenbach was haunted by many evil ghosts. With inherent desire to “troublemake,” the ghosts, which are invisible to the human eye, use fright as fuel to increase their power and ability to affect the world around them. He swore to one day find a way to defeat them. Many years later, he is a chemistry teacher at Central High School. He has finally developed a technology that enables humans to fight and capture ghosts! He secretly recruits three students Andy, Sam, and Liv. They form a team of superheroes known as the Ghost Force, tasked with secretly hunting down and capturing the ghosts that terrorize New York City. Operating from the secret underground laboratory built by the Professor, they are the city's only line of paranormal defense and must put their daily lives on hold in order to ghost power-up and restore the city to normalcy before citizens catch on.