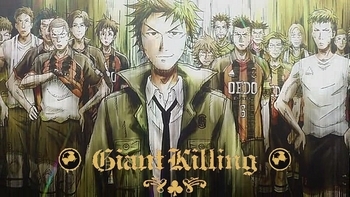 Giant Killing follows the ups and downs of the fictional soccer team ETU (East Tokyo United), which is very much down on its luck. As the series opens they've lost their last five matches, after a long period of shoddy performances, and are languishing at the bottom of their league. Their fans have nigh on abandoned them and even the kids in their own youth academy think they suck. They are without a sponsor and are currently scraping along on money from the local municipality - clear signs that they could fold if things don't change soon. In fact they haven't done really well since the days of their star player, Takeshi Tatsumi.

Things may be about to change though, for Takeshi Tatsumi has returned to manage ETU after a stint in England where he managed to direct an amateur village team all the way to The FA Cup's fourth round. However his return brings resistance from fans and teammates alike, many of whom have never forgiven him for leaving to go abroad in the first place, especially as he was the playmaker, so they blame things going foul after his departure on him. On his return he decides to bump several key players off the starting eleven - including local hero, team captain Shigeyuki Murakoshi, the only man that has kept the team from completely falling into disaster - based on their performance during time trials alone. Suffice to say Tatsumi has his work cut out for him.

Originating as a manga by Masaya Tsunamoto, Giant Killing was later animated by Studio DEEN. The anime was available on Crunchyroll, with an HD version available to subscribers an hour after broadcast, and an SD version to non-subscribers a week after.