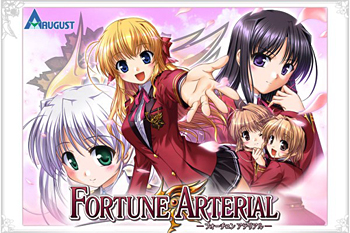 Kouhei Hasekura has spent his entire life moving from place to place, but that's about to end. He moves to Tamatsu Island, a place he stayed seven years ago. He'll be attending Shuchikan Academy, an elite private school which incorporates junior high and high school in a six-year English system. As he approaches the school where his new life will begin, he runs into the student council vice president, Erika Sendou. As they're about to shake hands, Erika suddenly runs away. This marks the beginning of a tale of school life, romance and...vampires?

Based on the Visual Novel of the same name by August (which also made Yoake Mae Yori Ruri Iro Na), Fortune Arterial was adapted into a 12-Episode Anime, Fortune Arterial: Akai Yakusoku in the fall of 2010, as well as an Updated Re-release for the PS3 with the same title (it was later canceled). The series also received an OVA, bundled with one of the manga volumes. There's also a Fan Translation incoming, with two partial patches released.

Tropes in Fortune Arterial include: