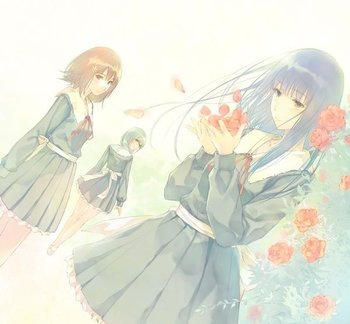 In the middle of a deep, dense forest can be found a hidden grove of beauty: Saint Angraecum Academy, a missionary school for proper young ladies of high school age. Although it is renowned for many reasons, from the gorgeousness of its Western-style architecture to its coveted ballet education, there is one programme that demonstrates its uniqueness: the Amitié system, in which girls are paired together as partners and encouraged to develop a deep, long-lasting friendship. However, friendship is not all that blossoms between the young girls at Saint Angraecum...

Flowers is an all-ages Japanese visual novel series in four seasonally-themed parts, each involving around the same core cast of characters but with different protagonists and love interests:

Flowers is produced by Innocent Grey (though it bears a strikingly different tone to the company's most famous previous game); the English translation of Le Volume sur Printemps was published by Jast USA.