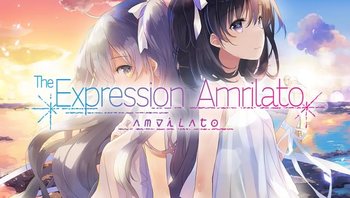 A story about two girls bonding and breaking down language barriers.
Advertisement:

The Expression Amrilato (in Japanese, Kotonoha Amrilato) is an educational Yuri Isekai Visual Novel about a Japanese high school girl named Rin who finds herself in a world where the sky is always pink, and everyone speaks a strange language called Juliamo, which is a slightly dressed up version of Esperanto. Helping her adjust to this new world are Ruka, a girl who speaks a little Japanese and who Rin thinks looks like an idol, and Rei, a librarian and member of the Vizitanto Administration that deals with integrating new arrivals into the world.

Tropes in The Expression Amrilato