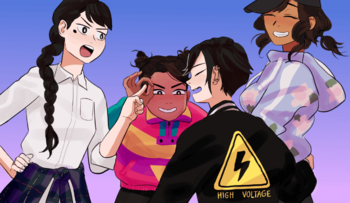 "You know how during metamorphosis, inside the chrysalis, the caterpillar turns into a soup?"note Left to right: Noelle, Akarsha, Min-seo, and Diya
Advertisement:

Butterfly Soup is a Ren'Py-based Visual Novel released in 2017 by developer Brianna Lei.

The story follows a group of LGBT, Asian-American teenage girls who decide to join their high school's baseball club. Throughout the game, the player watches the story unfold through the perspective of each of the games' four protagonists:

Diya and Min's budding romance serves as the main plot of the game.

The game is downloadable for free on itch.io

. However, the developer also allows people to support the game financially by buying an additional artwork PDF.