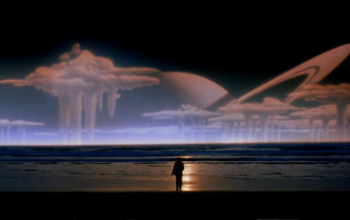 "There has been a malfunction in Project Flashlight, with devastating results."
"I could see the Earth and Moon in the sky of this strange world, Gaea... That's what they call this place."
— Hitomi, The Vision of Escaflowne
Advertisement:

An unusual-looking sky is a surefire way of showing the audience that the characters are not on Earth, or at least not on Earth as we know it. Maybe there are two moons. Perhaps Earth's all-too-familiar moon, the one in so many love songs, is broken into so many pieces it's become a ring of debris around the planet. Or the sky is dominated by a huge gas giant like Jupiter or Saturn, suggesting you are in fact, technically, on the moon. The sun is a different colour, or has a little and a bigger brother. The daytime sky is a lovely shade of deep purple. The nighttime sky is empty. Maybe the sky is simply home to cloudforms that are not of this world... or lifeforms. Or rocks.

A Super-Trope to Binary Suns, Bad Moon Rising, The Stars Are Going Out and several others. Compare Zeppelins from Another World.