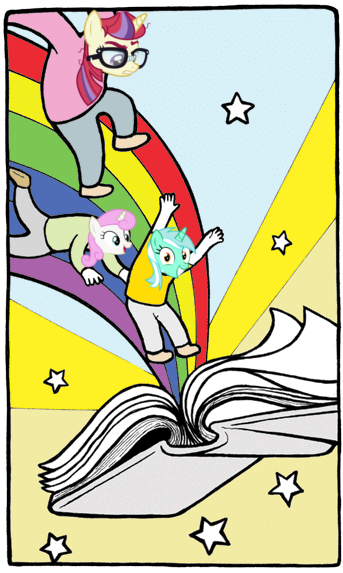 Clockwise, from the top: Moondancer, Lyra Heartstrings, and The Other One.
“Read a fucking book.”
— Minuette

A My Little Pony: Friendship Is Magic Round Robin fanfic by Insaneponyauthor, and set in the same verse as their prior fics. The full title is Danger Than Fiction, or, Pony Pony Literature Club, or, Take a Look, You're in a Book, or, Four Nerds and an Alcoholic (Who Is also a Nerd), or, Virtue Rewarded.

It was supposed to be a simple get-together. Moondancer, Lyra, Minuette, Twinkleshine, and Lemon Hearts were going to meet their old friend Twilight at a local bookstore and then go out for dinner. But somepony had the bright idea of hitting up a bar beforehand.

And then the bookstore turned out to be one of those seedy establishments peddling magic books that suck unsuspecting readers into the narrative. Oops.

Now these five mares are stuck in a maze, one built from the plots of dozens of different books. Fortunately, as graduates of Celestia’s School for Gifted Unicorns, they’re ideally suited to escape this literary labyrinth... Or they would be, if they were a little more sober.

Jump into the story yourself, here