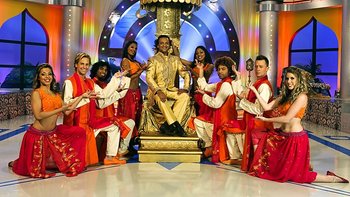 That's me - Ajay. My life had become rather dull. But it all changed when I came across a magic ring. I got transported to my own planet to have 30 minutes of fun in outer space!
—The Opening Narration from the show's intro.
Advertisement:

Planet Ajay is a British children's show created by Ajay Chhabra that aired from 2009 to 2010 on CBBC.

The eponymous main character Ajay finds a magic ring that allows him to travel to "Planet Ajay", an area that is based around Indian culture. Ajay owns a palace on this planet resembling the Taj Mahal, which has a stage room where an audience of children watch his performances; this palace is the setting for every episode of the show. Ajay has a few friends in Planet Ajay, including a robot named Chips and a scientist girl named Preeti; he also has to contend with a troublemaking twin of his, named Badjay. Whenever Ajay travels to Planet Ajay, he has 30 minutes before the magic of the magic ring wears out and he has to travel back to Earth.

The show is basically a hybrid comedy/game show, with game segments placed in-between the scenes in the actual episode. There are two game segments: "Under Pressure", where three contestants must answer a "true or false" question, and if they get it right they pull one of three chains in the hope that it will release some curry from the planet's core, this winning the contestant a prize, and "Beat Badjay", where a contestant has to ask Badjay a few questions, and if he gets three right the contestant is dropped into a pool of slime below; on the other hand, if Badjay gets three questions wrong, he gets dropped into the pool of slime and the contestant wins prizes based on how many incorrect answers Badjay gives.

That's it! My time is up. Back to Earth. But will I find my magic ring again to take me back to Planet Ajay?