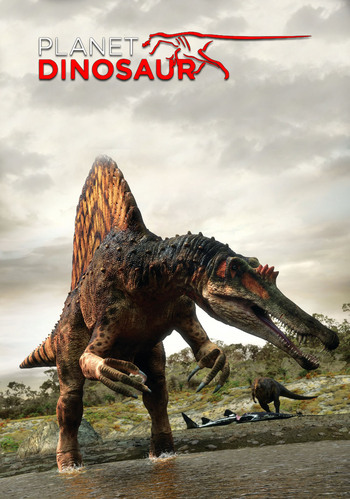 In the wake of the dinosaur documentary craze of 2011, the BBC has released their contribution to the phenomenon, a TV show titled Planet Dinosaur. Following in the footsteps of the BBC's very own Walking with Dinosaurs, this docu-show is also broadcast as a six-episode Mini Series, but unlike its famous predecessor, it doesn't merely tell six half hour-long stories, but a whopping 24, putting onto the screen 50 (that's fifty!) different types of prehistoric monsters, from dinosaurs to pterosaurs and marine reptiles. The lack of talking heads means the narration, provided by John Hurt, plays a crucial role in bringing the prehistoric stories to life.

Scientific accuracy based on the very latest palaeontological finds and spectacular visual effects have been a priority in creating the series. The entire imagery is CGI, including the environments, and the animals show painstakingly crafted details on their bodies. At various times during the show, the stories take a break for the narration to explain the scientific evidence behind each scene.

Not to be confused with the very similarly titled Dinosaur Planet, which is a Discovery Channel production, nor with Planet of Dinosaurs, an Italian series made in The '90s, also broadcast in English-speaking countries.

The work provides examples of the following tropes: