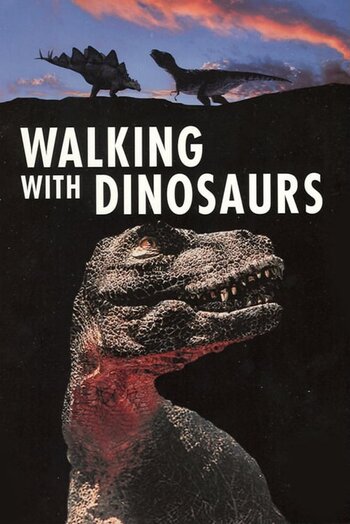 "But for a brief moment in time, reptiles ruled, and dinosaurs walked the Earth..."
"Imagine you could travel back in time, to a time long before man."
— Kenneth Branagh, the show's narrator.
Advertisement:

Walking with Dinosaurs is a 1999 BBC/Discovery Channel Speculative Documentary series focusing on... well... dinosaurs, using state-of-the-art CGI and animatronics to recreate Mesozoic life. It was narrated by Kenneth Branagh, and is the first entry in the Walking with Dinosaurs franchise.

Six episodes present six different parts of the reign of the dinosaurs - from their birth in the Triassic Period, to their extinction. These episodes are:

For the series' initial U.S. run on the Discovery Channel, the program was abridged to play in a 3-hour timeslot as a continuous two hour-long special, and was largely rewritten, the new narration handled by Avery Brooks. This version has remained exclusive to television and sporadic appearances on streaming services.

For the 2013 film that shares its name with this series but is otherwise only loosely based on it, please look here.

The most fearsome predator of the Jurassic is watching his prey... and it's not the dinosaur, but the massive pliosaur hunting it.

Example of:
Always a Bigger Fish

Giant of the Skies

The most fearsome predator of the Jurassic is watching his prey... and it's not the dinosaur, but the massive pliosaur hunting it.

Giant of the Skies