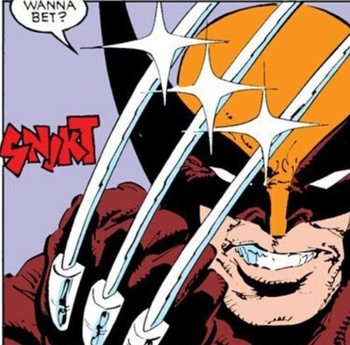 Magneto was totally betting on "SHWING".
"Claws make no noise as they slide out, but they ought to. They ought to make a noise like 'tzing'."
— Witches Abroad
Advertisement:

When weapons with sharp and cutting edges are brandished, a vaguely metallic sound effect will be inserted (along with a bit of Lens Flare) to signify just how lethally sharp the weapon is.

The tone of the sharpness, as with musical instruments, is dependent on size.

A katana makes a tiny, high-pitched sound; the stabbing metal arms of a Humongous Mecha are much deeper, but fundamentally the same sound. The sound can either be a strike-like ping or a longer vibration sound, usually depending on how the light strikes.

Common in animated works, sometimes as a trope, and sometimes as a humorous subversion. Sometimes even non-metal objects make a metallic scraping sound, like a predator's row upon row of pointed teeth.

Keep in mind, the creators know that sharp things generally don't make noise — although some sword scabbards with a metal throat do actually 'schwing' on being drawn. They do it because 1. It sounds cool and 2. The audience expects it. This is also partially because in old timey radio shows, they would use this noise to demonstrate that someone was drawing a knife because of Rule of Perception, so it's sometimes justified.

Used by the same kind of series that would use Sword Sparks, a subset of The Coconut Effect. For objects that aren't sharp but still cast an ambient hum along with their glow, see Audible Gleam. See also this trope's Gun Counterpart, Noisy Guns.

Scissors taking his blade out of the holder is accompanied by sword sound effects.

Scissors taking his blade out of the holder is accompanied by sword sound effects.