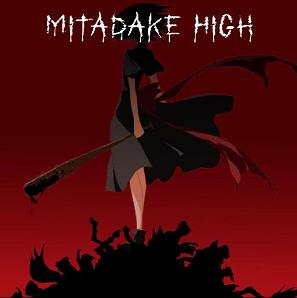 "You are the killer! ... But don't tell anyone. You've killed one of the faculty members and left her body in the main courtyard, heh. Your role in this game is to kill every other player while surviving yourself; therefore, it isn't a great idea to tell everyone that you're the killer. Use your wits and various tools around the school to help in this goal."
Advertisement:

. The game is similar to standard drama fare "Knives In The Dark": one player is the Killer (hereafter referred to in male terms) and must attempt to bury the unfortunates trapped with him before dawn. Alternative game modes include Death Note mode, in which one character ('Kira') spawns with a Death Note and another has the Shinigami Eyes, forcing the two to work together in order to kill everyone else; and Nanaya Mode, an out-and-out free-for-all. The reason for it being Mitadake "High" is because the default map takes place in a high school; an external map editor allows hosts to create additional maps to play on.

MH is heavily influenced by Higurashi: When They Cry, Death Note, and Tsukihime, with many shout outs to other anime in the bargain.

was created by Masterbraska in late 2011. The remake featured several new modes such as Zombie mode, Witch mode, Doppelganger mode and several others. At some point, a character maker was added to the game, allowing users to select their hairstyle and name, but this was poorly received as the color mixer meant all the hair colors were neon-bright and players would play as the same character every round. In the end, the game broke up due to internal drama with the staff and the userbase jumped ship to Misuterii High, which had just opened for alpha testing.

was created by Metafrosty at the end of 2013 with the intention of making a game that was more true to the original game. It was well received and updated quickly, making many improvements such as having the game run at a higher framerate so it wasn't as choppy as previous games, and adding pixel movement as opposed to grid based movement. Normal mode was given some upgrades with the randomly spawned Suspect and Accomplice roles to breath some freshness into the basic mode.The game also features a Death Note mode, an Umineko mode, a Shiki mode, a Madoka mode, a Tsukihime mode, and an upcoming Psycho-Pass mode. Additionally, users can create their own custom modes using "Mystery Script", a language created for such a purpose which also functions with the map maker, allowing for much more intricate custom maps than before.