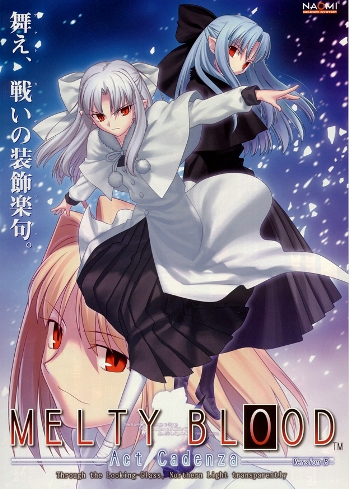 Spin-off Fighting Game based on TYPE-MOON's famous visual novel, Tsukihime. As a direct sequel to Tsukihime and Kagetsu Tohya, it is rather story-heavy, expanding the canon considerably; a surprisingly large amount of content can be taken as correct interpretations of various characters' skills and abilities.
Advertisement:

First co-developed by Watanabe Production (now French-Bread) and TYPE-MOON and released for the PC, the game has gone through several iterations:

What sets it apart is the atmosphere and the characters, who have powers rarely seen in fighting games in general.

It has incorporated many features from other fighting games; clashing (two attacks hit and cancel each other), cancelling (cancel one move into another), shielding and EX-Shielding (the latter allows for a riposte at cost of the Magic Circuit). Regular combos can be powered up by using the Magic Circuit. Specials made during Heat or Blood Heat Mode (when Magic Circuit is high) are called Arc Drives. Counters made during Blood Heat are called Last Arcs that look very cool and deal a ton of damage with some causing Circuit Break to the opponent (self-explanatory).

Where Melty Blood really begins to stand out are in the ways it plays with fighting game conventions. For starters, each special move a character has carries a super variant activated by doing the input and pressing the heavy attack button. This gives characters an unusually high amount of super moves for a fighting game, especially when one factors in the game's high meter gain. Upon reaching full meter, the player automatically enters into Heat Mode, which slowly drains meter and gives access to techniques like bursting and the aforementioned Arc Drives. This threat of all your meter being drained unless you efficiently use it coupled with easy to access and plentiful supers creates a game where resources are constantly being spent and insanely cool moves are being tossed out all the time. Later iterations would add further character diversity with the introduction of Moons, unique movesets for each character that can drastically change how each character plays to the point where official tier lists place the same character at multiple tiers depending on which Moon they have equipped. The combo oriented Crescent Moon, the powerful resource-spending Full Moon and the balanced Half Moon provide unique opportunities to play the same character and effectively triple the size of the cast. Lastly, Melty Blood is unique in that its air mobility for the cast is universal. Every character gets a double jump and an air dash whenever they enter into the air, meaning it can be difficult to pin people down as they zip about the stage. All of this combines to form a fighter that thrives on Rule of Cool while still providing a deep and enthralling experience.

. The game made its American professional tournament debut at Evolution 2010. A tournament-centric fansite exists for Western fans in the form of Melty Bread

Received a Spiritual Successor in 2012 called Under Night In-Birth, where Sion appears as a Guest Fighter (under the re-tweaked name of Sion Eltnum Atlasia).