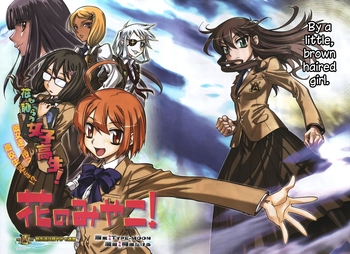 A Tsukihime spinoff manga authored by Takeru Kirishima, who also did the Melty Blood manga and Melty Blood X.

Taking place in a high school entitled the Asagami Academy (the same one Akiha attended in Tsukihime, albeit a bit different now), where student rankings are decided by strength, with higher rankings meaning more privileges. A few of the highest ranked students form the Crimson Moon Committee, who pretty much run things. The principal freely admits that this is barbaric, interferes with actual education, and leads to lower-rankers being treated like dirt, but won't actually do anything about it.

As the title would imply, the main character is Miyako Arima, now a few years older. Miyako is attempting to be as normal and unnoticed as possible, after having spent most of middle school beating people up. Naturally, she repeatedly screws up and gets into fights.

And then, things spiral completely out of control as soon as she gets involved with the other protagonist of the series: a small girl of Miyako's age by the name of Shiki Nanaya.

As of December 2014, the serialization has been cancelled, but it's being continued as an officially Type-Moon approved doujin.