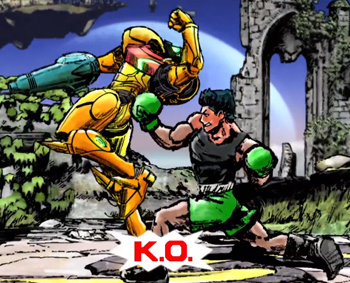 Punches vs the most advanced suit of power armor a warrior race could make. Seems fair.
"The punch is mightier than the sword!"
— Doc Louis, Super Smash Bros. for Nintendo 3DS and Wii U
Advertisement:

In general parlance, boxing is a combat sport where two fighters square off in fisticuffs. However, once in a while writers remember that boxing is considered a martial art and it is used as a fighter's style of choice outside the ring. In these cases, boxing techniques and skills will be presented as every bit as valid as any other martial art, Red Boxing Gloves optional, depending on the seriousness of the work.

Generally an Extremity Extremist, since traditionally boxing has no kicks. Expect Rapid-Fire Fisticuffs if the fighter is sufficiently strong. Compare Good Old Fisticuffs, which is about untrained fighters are equal to trained martial artists (and they'll generally use some boxing moves, as it's the most "accessible" martial art for them to witness).

A subtrope of Bare-Fisted Monk. Technically a subtrope of I Know Madden Kombat assuming the character was trained in boxing for sport.

Luigi fights a pair of Hammers in the Fitness Center, one of which having boxing gloves and punching Luigi

Luigi fights a pair of Hammers in the Fitness Center, one of which having boxing gloves and punching Luigi