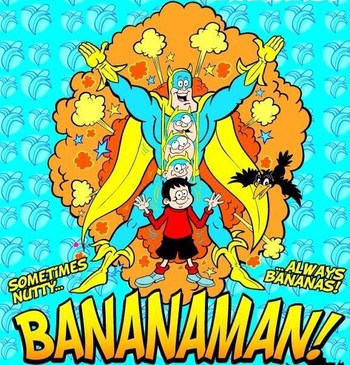 When Eric eats a banana, an amazing transformation occurs! Eric is Bananaman!
Banner: If I turn into the Hulk, I am never gonna come back again. And you don't care....
Thor: No! I don't even like the Hulk. He's all like, "Smash, smash, smash!" I prefer you. But if I'm being honest, when it comes to fighting evil beings, he is very powerful and useful.
Banner: Banner's powerful and useful, too.
Thor: Is he, though?
— Thor: Ragnarok
Advertisement:

The case where a being is able to engage in superheroics or grand villainy not by gaining any powers or by being a Badass Normal, but by being a vessel in some fashion for another personality that does have superpowers, but only when that personality takes control.

This personality can also look and be physically very different. This takes several superhero/villain issues and solves them in a single stroke. They don't need a disguise because you wouldn't be able to tell by looking at them. Normally, however, writers will not remove the issue of being discovered; they'll use the single moment of transformation as a time where the secret can be discovered or requires the hero diving off into that phone booth. They just don't have to constantly worry about the issue. They can keep the superhero relatable by having the non-powered character be The Everyman or Ordinary High-School Student. They also won't have the same "using your powers for selfish gain" issue because a complete personality change can't be used so easily.

The transformation can often be handled by a Transformation Sequence. Issues about how the personality is split off can vary. Sometimes it's like it's just another person hiding inside their body until the right moment, other times it's a total personality shift but they'll retain the memories of being that Superpowered Alter Ego and it will still be them. Maybe some Fan Wank, or even deliberate ambiguity, will occur over how much the alter ego is a separate personality at all or whether it's more of a Super Mode or Henshin Hero with a confidence boost.

From Banner to Hulk

Bruce lets his alter ego come out and play.

From Banner to Hulk

Bruce lets his alter ego come out and play.