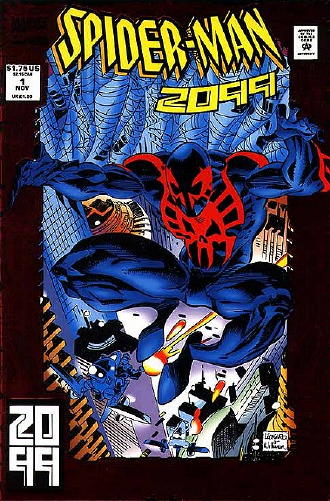 Spider-Man 2099 was the first title of Marvel Comics' Marvel 2099 venture.

Miguel O'Hara, a geneticist for the Mega-Corp Alchemax, was working on a way to splice a person's genetic codes to give them superpowers. He bases his ideal creation on one of the heroic age's greatest super-heroes, Spider-Man, hoping to create the ultimate "corporate raider". When an experiment goes awry, resulting in the death of the volunteer, Miguel decides to quit. However, his boss, Tyler Stone, tricks him into taking some Rapture, a drug that bonds with the user's genetic structure and makes them highly addicted. As Alchemax is the only legal supplier of the drug, Stone believes Miguel will have no choice but to stay with Alchemax.

Refusing to accept this, Miguel sneaks into his lab that night, hoping to use his genetic imprint (which he had used as a base in his experiments) to restore him to the way he was before. However, a jealous co-worker sees him and sabotages the machinery, hoping to kill him. Instead, Miguel emerges with the Spider-Man genetic code imprinted on him, having gained fangs, claws, and enhanced strength and vision.

After being forced to run from Alchemax security, Miguel finds himself chased by Venture, a Cyborg sent by Stone to capture him so he can be studied. Donning an outfit he wore for a Day of the Dead festival, Miguel takes on Venture, and beats him, signalling the beginning of his career as the Spider-Man of 2099.

Although Miguel started off looking for a cure for his condition, he soon realized the horrors Alchemax and other corporations had caused in the world, and made it his mission to make things better.

Spider-Man 2099 was by far the most prolific Marvel 2099 title, with the character surviving long after the franchise's end, appearing in such series as Exiles. After guest-starring in the Superior Spider-Man series, Miguel gained a brand new series in 2014, which showcases Miguel's attempts to prevent Alchemax from becoming the company it's known as in the future. As a result of Secret Wars (2015), the title was temporarily renamed Secret Wars 2099 and focused on a 2099 version of The Avengers. With the conclusion of Secret Wars 2099, the book was relaunched under its previous title, with a new Parker Industries-made costume for Miguel. This third volume lasted for twenty-five issues.

In 2019, Spider-Man 2099 made a surprise return in The Amazing Spider-Man (Nick Spencer), trying to warn Peter that the future had been destabilized due to too many changes manifesting in Earth-616.