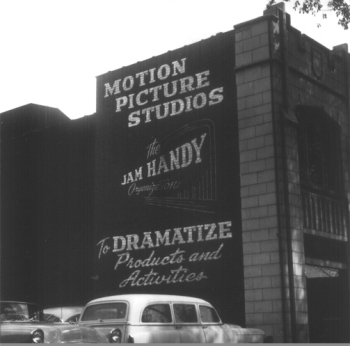 Jam Handy to the rescue!

The Jam Handy Organization (reminding you to keep your preserves in a convenient place) was a filmmaking outfit specializing in training and other special-purpose films. The eponymous founder, Henry Jamison "Jam" Handy, was an Olympic medalist swimmer (1904) who branched out from sports to become a film producer.

Jam Handy is particularly infamous with Mystery Science Theater 3000 fans as the progenitor of many shorts like Young Man's Fancy, Hired! and A Case of Spring Fever. Jam Handy shorts featured on MST3K tended to be notable for the mundane, insanely specific subject matter.

Interestingly, Jam Handy is the producer of the first Rudolph the Red-Nosed Reindeer short (1948), which is actually faithful to the original book. This was featured as a RiffTrax on Christmas shorts.

The two-disc DVD release of MST3K's version of "Manos" The Hands of Fate includes a documentary on Jam Handy, providing some unique insight into the shorts.

The Internet Archive has a collection of films

produced by the Jam Handy Organization, as they're all Public Domain.