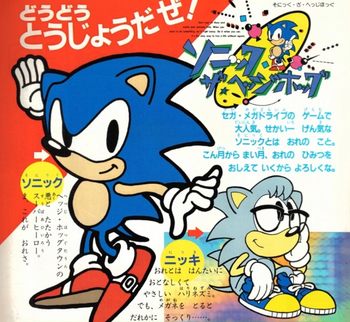 This manga stars a bookish 10-year old hedgehog named Nicky who lives in Hedgehog Town. Nicky can transform into his alter ego, the much cooler Sonic the Hedgehog. As Sonic, Nicky fights the evil Dr. Eggman alongside his sidekick Miles "Tails" Prower. No one besides Tails knows that Nicky is really Sonic, not even Nicky himself.

Despite being only one of many Sonic manga, this early manga is the most well-known because it gave rise to two long-standing characters: Amy Rose and Charmy Bee, and thanks to Early Adaptation Weirdness.

The manga is rare and has never reprinted into volumes, but a work-in-progress collection of online scans can be found in this Sonic Retro thread