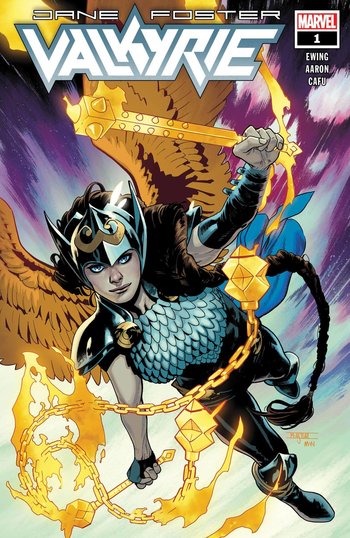 You took on a role — but this is a responsibility. Thor is a god. Valkyrie is a job."
— Brunnhilde
Advertisement:

Jane Foster: Valkyrie is a 2019 Marvel Comics series, co-written by Jason Aaron and Al Ewing, illustrated by Cafu. Spinning off from War of the Realms, it stars Jane Foster in her new role as the last Valkyrie, aided by Undrjarn the All-Weapon.

The series ended after 10 issues, coming to an abrupt halt as a result of the COVID-19 Pandemic's impact on the comic book industry, but was later followed by King In Black: Return of The Valkyries. A further continuation, The Mighty Valkyries, partially salvaged what would have been this series' canceled issues.