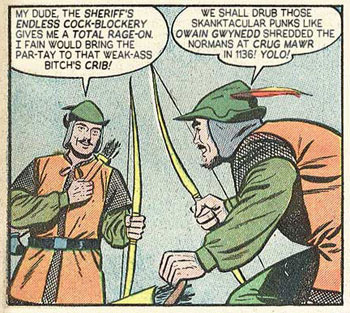 is written by Allen White, and utilizes public domain work for its source material, a long list of Golden Age comics for which copyright has lapsed. Every effort is made to keep the material in its original form, complete with aged, faded pages. The works are published as issues complete with cover art, and stories are bracketed by altered comic book advertisements.

The stories undermine and mock genres, such as Action-Adventure, Speculative Fiction, Horror, Crime And Punishment, War, and many more.

The humor ranges from puerile to political, from absurdist to whimsical, and is distinctly adult in flavor.