Comic Book / War of the Realms 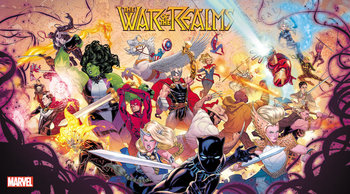 In the beginning, there was only darkness.
The great unending nothingness of the Yawning Void.
Then from the south came roaring fire, and from the north swirling ice and mist.
And where the two forces clashed in the heart of the void, life was born.
Elves and giants. Dwarves and goblins. Gods and men.
And realms were made for each of them. Ten in total.
Each with its own place along the World Tree. Each with its own wonders and terrors.
This is the story of those ten realms.
And of the mighty war that ravaged them all.
— Opening Narration
Advertisement:

War of the Realms is a 2019 Marvel Comics crisis crossover, written by Jason Aaron and drawn by Russell Dauterman, both previously of the Jane Foster era of Thor.

War has been raging across the Ten Realms. Led by Malekith, his massive army of Dark Elves has torn through various realms and taken them over. With the Bifrost Bridge destroyed and Heimdall now blind thanks to the Mangog's rampage, Thor has been unable to directly aid the other realms in battle.

But now, the war has made its way to the final realm — Midgard, also known as Earth— and Thor cannot fight Malekith on his own. It's all-hands-on-deck as the God of Thunder gathers his allies old and new (including The Avengers, Spider-Man, Daredevil, the Asgardians of The Galaxy, and more) to defend Earth from this invasion.

War of the Realms is the culmination of plot threads started by Aaron since launching his Thor: God of Thunder title in 2012, as well as his 2013 event series Original Sin, which led to Odinson being deemed unworthy and Jane Foster replacing him as Goddess of Thunder.

Advertisement:
Comics involved in War of the Realms

February-March 2019 — Road to War of the Realms

War of the Realms contains examples of:

Alternative Title(s): The War Of The Realms