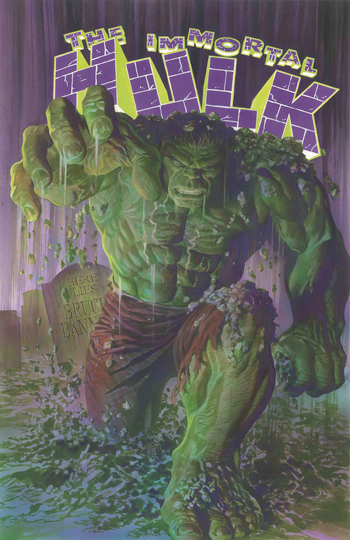 Is he Man or Monster or... Is he both?
"My name is Bruce Banner. Years ago...I died. But I couldn't stop screaming. So I got up again. Something inside me was unlocked that day. A dark opposite. A shadow self. Stronger than me. Stronger than anyone. Too strong for death to claim."
— Bruce Banner
Advertisement:

The Immortal Hulk is a 2018 Marvel comic book written by Al Ewing and illustrated by Joe Bennett, with covers by Alex Ross. It's a spin-off of Avengers: No Surrender starring a resurrected Bruce Banner... and the series has one of the most disturbing interpretations of The Incredible Hulk to grace the mainstream Marvel Universe.

A few years ago, Bruce Banner died. And then he came back... again and again. It wasn't even that difficult — all it took was a nudge, a prod, and the Hulk would come back to life before returning to death. And then, due to the Challenger, the Hulk returned permanently. However, the last time was something of a revelation to Bruce Banner, as it came with the knowledge of why he had been coming back: because the Hulk can't die.

So now Bruce wanders the country, trying to slip by unnoticed. And if someone shoots him, well, he'll die. And then night will fall. And the Immortal Hulk will rise, stronger, smarter, and more ruthless than he has ever been.

No more Hulk Speak. No more Gentle Giant. The Immortal Hulk is a horror comic.

As the series progressed, The Immortal Hulk deconstructed the nature of the comic book death, and explored psychological and even supernatural angles to the Hulk's powers, all of which were given a sufficiently horrifying twist befitting of a darker narrative. With the cast of the character's world reimagined, it becomes clear that Hulk's place in the Marvel Universe will never be the same.

The series ended with its fiftieth issue, which resolved the main plot arc, and was succeeded by a run by Donny Cates. It was accompanied by a five-issue spin-off miniseries, Gamma Flight, co-written by Al Ewing and Crystal Frasier, with art by Lan Medina.

Tropes included in The Immortal Hulk: