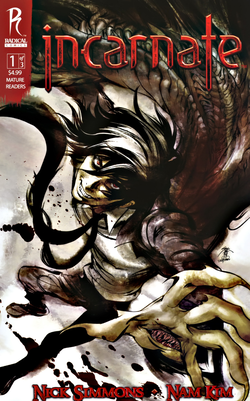 "Between last night and this morning, I've been getting a lot of messages from overseas fans along the lines of 'There's an American comic ripping off Bleach!' I'm not that good at English, but I looked at the site and it seems it's a comic by Nick Simmons, the son of Gene Simmons. To be honest, I'm more bothered by the fact that Gene Simmons' son is a comic artist than whether or not it's a rip-off..."
— Tite Kubo, creator of Bleach, when asked about Incarnate's plagiarism accusations.
Advertisement:

Incarnate is the story of the Revenants, vampire-like monsters who call themselves by the names of Egyptian gods, who eat humans. Two Revenants, Mot and Connor, are kidnapped by an anti-Revenant organization called Sanctum. Are they used as living weapons or experimented on? No, they're equipped with death collars attached to their spines and given as playthings to Sybil, the daughter of Sanctum's head. It takes Connor about one page to develop Stockholm Syndrome, and Mot isn't far behind. Naturally, the other Revenants aren't pleased, and Sanctum's recently found a way to kill those same Revenants.

On the internet, the series is probably best known for being accused of plagiarizing characters, concepts, and line-art from several other works

Bleach. Due to these accusations the series' distribution was halted after three issues.