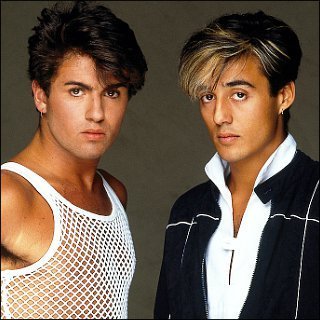 Wham! was an English pop duo, consisting of George Michael and Andrew Ridgeley.

Michael and Ridgeley met in secondary school, where they founded and played in a ska band with a couple of their fellow schoolmates. The two founded Wham! in 1981.

They signed on with Innervision Records, and released their debut single "Wham Rap!", which (initially, at least) fell flat on the charts. Their second single, Young Guns (Go for It), however, was significantly more successful, and helped the group establish itself with a teenage audience. In 1983, they released their debut album, Fantastic.

After Innervision went out of business, the duo switched to Epic Records. Over the next couple of years, they released a number of hit singles, including "Wake Me Up Before You Go-Go", "Careless Whisper" (which, though credited to Wham! and written by Ridgeley, only starred Michael), and "Last Christmas/Everything She Wants". Their second album, Make it Big, dropped in 1984, and topped the charts. Through 1985, the duo embarked on a world tour, including a much-publicized 10-day visit to China (they were the first western pop group to visit the country).

By this point, however, Michael wanted to move on to more adult-oriented music. And so, on June 26, 1986, the duo played their final concert at Wembley Stadium, bidding farewell to their fans.

Michael would go on to find success as a solo artist, before sadly dying in 2016 at age 53. Ridgeley, on the other hand, tried his hand at car racing, before releasing a solo album, Son of Albert, in 1990. The album flopped, and he faded from the public eye. That was, until nearly 30 years later in 2019, when he announced that he was working on a book titled Wham! George & Me, to be released on October 3 of that year. It is a personal memoir detailing not only Andrew's life-long friendship with George Michael, but also, from his perspective, his time in Wham! from the day he met George up until the group's final concert in 1986.

Who knew a group of friends spraying each other in gasoline would end in tragedy?

Who knew a group of friends spraying each other in gasoline would end in tragedy?