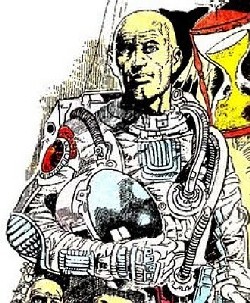 "If those guys from Uruk could see me now...!"
Gilgamesh the Immortal is an Argentine comic book, made by Robin Wood and Lucho Olivera. As it can be guessed, it's freely based on the mythical The Epic of Gilgamesh.
Advertisement:

Gilgamesh was the heir to the throne of the ancient city of Uruk. In his childish naivety, he did not understand the concept of "death", he thought that the king should be spared from it. As he grew, his fear of death became a ongoing phobia. An alien ship crashed near the city, and he met the alien inside it: Utnapishtim. He was from a race that had achieved immortality, and he gave to him using his alien machines. Thus, the king Gilgamesh never ages and is impossible to kill. But, as generations passed, Uruk declined: all people were sad because their king's immortality reminded them of their own mortality. So, he staged his death and left the city, which became active again.

Gilgamesh became an errant, and saw all the historical civilization, many historical peoples, took part in several historical events. The single thing he despises the most is war, but he is unable to do anything to prevent any of them.

Finally, a nuclear reactor explodes, and all humanity perishes. All, except for Gilgamesh of course. But he saw a chance: a project in the United States to take frozen humans to other planets. Gilgamesh completed the plan, and explored the universe to find a new planet to let humanity start again. He met other alien races, and eventually settles at another planet. The embryos become a tribe and, centuries later, a technologically advanced society. This new human race, unaware of being alien to that planet, organizes a space journey to planet earth, after discovering life in it. Gilgamesh joins it, but the tripulation dies during an accident after arriving. Gilgamesh is then left alone on a devastated planet.

He eventually meets other aliens that preserved human life in a similar manner, and would restore the human race when radiation had lowered to allow life again. Another alien race establishes itself on earth, but is followed by an enemy ship and destroyed. Gilgamesh kills the single attacking alien, but realises that the action was observed by others of his race. Fearing a counter-attack that would devastate the small tribe of humans, he takes the spaceship in an attempt to take the fight to the space. He meets an alien outpost on Mars, of the same race as those who made him immortal, and together they destroy the whole attacking fleet.

Gilgamesh the Immortal contains examples of: