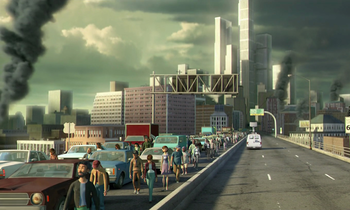 "Suetonius, however, with wonderful resolution, marched amidst a hostile population to Londinium, which, though undistinguished by the name of a colony, was much frequented by a number of merchants and trading vessels. Uncertain whether he should choose it as a seat of war, as he looked round on his scanty force of soldiers, and remembered with what a serious warning the rashness of Petilius had been punished, he resolved to save the province at the cost of a single town. Nor did the tears and weeping of the people, as they implored his aid, deter him from giving the signal of departure and receiving into his army all who would go with him. "
— The Annals by Tacitus, verse 33
Advertisement:

There is a city full of innocents. Men, women, children; civilians. But danger is coming, and because those civilians live in the city each and every one of them is in grave danger. Maybe it's a Big Bad hoping to sack or massacre the city, maybe it's an impending natural disaster like a tsunami or a fire. Either way, it's too late to prevent what's coming and if people stay there they will die.

So they evacuate. They leave the city behind in order to escape with their lives. The local military or government might be organizing the evacuation (which would count as a Pet the Dog moment for them as it shows them extending effort to save civilian lives), or they might be trying to prevent it (either because they want to prove they can defend their cities or because they are what the civilians are fleeing from), or they might just be leaving civilians to their fate. Either way, people will still be leaving in a Mass-Exodus.

The people might take up residence in a new place, or they may return to their homes and try to rebuild once the danger has passed.

This can also be used as a way to show wide-scale destruction during a battle while justifying No Endor Holocaust.

When the relevant authority does not order such an evacuation, it may qualify as a massed Screw This, I'm Outta Here!.

If the people are fleeing from war or raids, then they are War Refugees. If someone tries to kill or otherwise prey upon these refugees, then that is Sink the Lifeboats (when applied to civilians it is a potent way to Kick the Dog or even cross the Moral Event Horizon). An unsuccessful evacuation may result in a Post-Apocalyptic Traffic Jam.