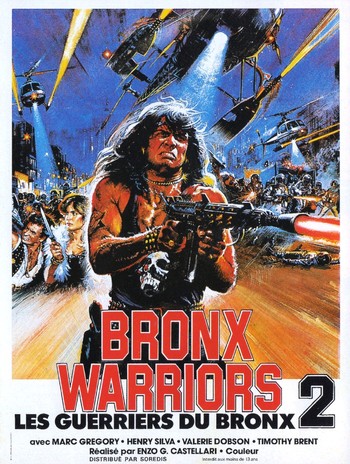 LEAVE THE BRONX. Sign up for a new house in enchanting New Mexico.
Advertisement:

Escape 2000, originally known as Escape from the Bronx, is the 1983 sequel to the 1982 post-apocalyptic action film 1990: The Bronx Warriors, which combined The Warriors with Escape from New York in its tale of Rebellious Non Royal Princess Ann falling in love with biker punk Trash (Mark Gregory) as they try to stop her family's Mega-Corp from oppressing the Wretched Hive that is THE "future" BRONX.

Years later, a new Mega-Corp, the General Construction Corporation, is planning to put the entirety of THE BRONX through urban renewal, and their Mooks are forcing people to "LEAVE THE BRONX" for new houses in New Mexico by any means necessary — one way or another. Trash and a few others continue to fight on the surface, but many of the gangs, led by textbook Boisterous Bruiser Dablone (Antonio Sabato), are content to hide underground until everything blows over.

Trash saves an Intrepid Reporter who nearly died trying to expose the truth of the GCC's actions, and she suggests a more direct way to stop the GCC — kidnap the company's president and hold him hostage!

For the Mystery Science Theater 3000 version, please go to the episode recap page. 1990: The Bronx Warriors was riffed by RiffTrax in Video On Demand format in 2019.

Not to be confused with the Ozploitation film Turkey Shoot, which was also marketed as Escape 2000 in the US.

1990: The Bronx Warriors and Escape from the Bronx/Escape 2000 contain examples of: