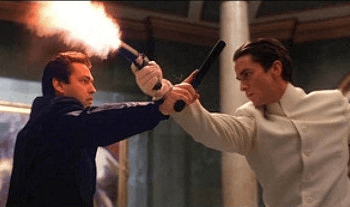 A typical sparring session of Take Gun Do.
"Each fluid position representing a maximum kill zone, inflicting maximum damage on the maximum number of opponents while keeping the defender clear of the statistically traditional trajectories of return fire. By the rote mastery of this art, your firing efficiency will rise by no less than 120%. The difference of a 63% increase to lethal proficiency makes the master of the gun katas an adversary not to be taken lightly."
— Vice-Counsel DuPont,

The Gun Kata is a firearm-based martial art used by Kurt Wimmer and Jim Vickers in their 2002 film Equilibrium, appearing in two styles.

Long Range: As opposed to the much more famous Bullet Time dodging popularized by The Matrix, the first form consists of The Gunslinger dodging bullets by assuming a set of predefined body positions, which are theoretically supposed to reduce their body area exposed to enemy fire to the smallest amount statistically possible, all while raining lead upon the enemy with their Guns Akimbo without even aiming at them. In his next film, Ultraviolet (2006), Wimmer further expanded the technique by allowing an unarmed Action Girl to assume such positions among the multiple enemies so that they shoot each other instead.

Short Range: Another form of Gun Kata depicted in Equilibrium, though never explicitly named, involves dueling with a single opponent at a very close range, with both duelists wielding guns and trying to point them at each other and pull the trigger, while constantly knocking off the enemy's aim (since a fired shot cannot be blocked or parried as in unarmed combat or fencing, except under exceptional circumstances). It is essentially the Wing Chun "Sticky Hands" technique, but with guns. Wimmer's commentary on the DVD notes that this different form is actually the result of a recurring problem during filming; they ran out of time and money to do what they originally planned and would not explain the original idea, as he intended to use it in a later movie (it's possible the final fight in Ultraviolet is the result). Both forms were reproduced in later works, especially in anime.

Runs on extreme amounts of Rule of Cool. While the latter form is Truth in Television as this is entirely possible, it disobeys several gun safety rules, and a much safer approach for both parties at that range would be to physically attack the opponent's person to make him unstable instead of trying to grab at his gun. The former, however, completely ignores the possibility of a target firing from cover, which is the fact of most gunfights in real life.

Compare and contrast to Gun Fu. Not related at all to the series Uta∽Kata. May serve as a pseudo-scientific justification for the existence of graduates of the Imperial Stormtrooper Marksmanship Academy.