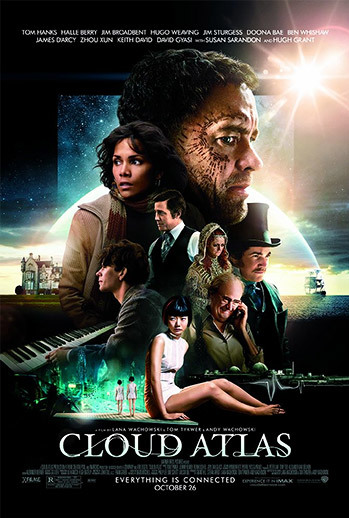 Trust us—there are far more characters.note Not as many more actors though.
"Our lives are not our own. We are bound to others, past and present. And by each crime and every kindness, we birth our future."
— Sonmi~451
Advertisement:

The film consists of six nested stories, each set in a different place and era, moving forwards in time from the 19th century all the way to the future After the End. Each story and style is a pastiche of the most recognizable examples of the genre, and lovingly combines old clichés with new twists. A comet-shaped birthmark appears in each story on the protagonist, and the characters reference names, places, and experiences from other stories. In chronological order, the protagonists of the six stories are:

In addition to the above, Hugo Weaving, James D'Arcy, Susan Sarandon, David Gyasi, Keith David, and Hugh Grant appear in supporting roles. Instead of being sequential, the film continually leaps back and forth between stories, with the actors playing multiple characters across time.