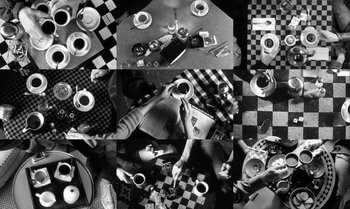 Coffee and Cigarettes is a 2003 film by Jim Jarmusch. It consists of 11 short vignettes in which characters converse over coffee and cigarettes. The first three (Strange to Meet You, Twins, and Somewhere in California) were filmed in 1986, 1989 and 1993 as individual short films, with Jarmusch later returning to the concept to create a feature-length collection.

Tropes appearing in Coffee and Cigarettes: