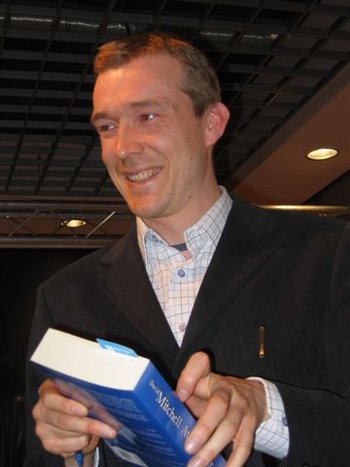 David Stephen Mitchell (born 12 January 1969) is an English novelist and screenwriter, best known for his centuries-spanning epic novel, Cloud Atlas. The Bone Clocks is perhaps his second-best well-known novel and is also highly regarded, to which, he won the 2015 World Fantasy Award.

He is twice nominated for the Man Booker Prize, for his novels number9dream and the aforementioned Cloud Atlas. He won the John Llewellyn Rhys Prize for Ghostwritten, and the ALA Alex Award for Black Swan Green.

More recently, he has dabbled into screenwriting, having co-written The Matrix Resurrections with Lana Wachowski, who directed the film adaptation of Cloud Atlas.

Mitchell has written the following novels:

Not the same as the David Mitchell on That Mitchell and Webb Look.

Tropes found in his works include: