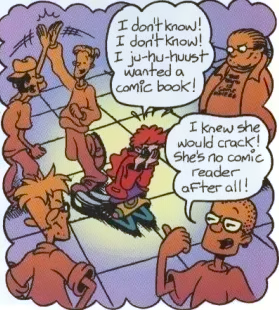 No True Scotsman (also referred to as the fallacy of "Victory by Definition" in Robert Allen's "The Propaganda Game") is an intentional logical fallacy which involves the act of setting up standards for a particular scenario, then redefining those same standards in order to exclude a particular outcome.
Advertisement:

The Trope Namer and prime example of this sort of behavior is a hypothetical scenario (first told by British philosopher Antony Flew in his 1975 book Thinking About Thinking) in which a Scotsman reads about a horrible crime in the newspaper that takes place in the English town of Brighton and smugly thinks to himself, "No Scotsman would ever do such a thing." Then something much worse happens in nearby Aberdeen and is reported on the next day. Rather than admit that he was wrong, he instead thinks, "No true Scotsman would ever do such a thing." In this case, he is retroactively changing his standards of what a Scotsman is from "someone who lives in Scotland" to "someone who lives in Scotland and meets my standards of acceptable Scottish behavior."

This is very common within subcultures. Works or creators are discredited as not part of the genre due to not living up to arbitrary standards (or just being popular). Often this is followed by examples of what are considered real examples of the genre (see also Pretender Diss). By extension, you aren't considered a real fan of the genre if you don't know of these works. Sometimes, when dealing with a Dead Horse Genre or another sufficiently ghettoized field, the fallacy is used to try and distance a well-liked entry from it. A related tactic is called gatekeeping

and refers to when someone claims to be a fan of X and another person challenges them to prove they are a "real" fan of X by reciting a bunch of facts about X.

In real life, it's most commonly found in arguments about politics, race, nationality, or religion, usually when it comes to perceived stereotypes that something negative "can only be done" in a specific region or group of people (especially the opponent's) and not the accuser's own group; while, of course, ignoring the fact that it can.

Essentially a form of Begging the Question, in that, to accept the argument that No True Scotsman would do X, one must accept that the definition of "True Scotsman" includes "would not do X." It's also a good example of Confirmation Bias in action. Related to Moving the Goalposts, where the definition isn't changed, but the standards for accepting a counter-argument are made increasingly more rigorous.

Tropes which rely on, or include this fallacy:

Not related to Violent Glaswegian, Brave Scot, The Scottish Trope, that Shcottish actor, or Fake Scot.

A form of Selective Obliviousness. Straw Affiliation is a related form of this. Stop Being Stereotypical and "Not So Different" Remark are often invoked when these situations occur. The inverse is Hitler Ate Sugar, when someone tries to argue that all True Scotsmen are evil because of one bad apple, though both tropes can be (and often are) used hand-in-hand to stigmatize and exclude certain people/things/etc.

In regards to Real Life examples, what may be considered as "a true/not a true (whatever)" often relies on personal interpretation which can result in heated arguments, so let's not go there.

It's perhaps also worth mentioning that, among those who wear the kilt, a "True Scotsman" is the humorous term for someone who is confident enough to go commando. So if someone asks "Are you a true Scotsman," it might not be this fallacy — they may just be wondering about your underwear.

The Mandalorian encounters the Nite Owls, a separate faction of Mandalorians who differ from The Children of The Watch that he was raised by who follows the tradition of never revealing their faces to others.

The Mandalorian encounters the Nite Owls, a separate faction of Mandalorians who differ from The Children of The Watch that he was raised by who follows the tradition of never revealing their faces to others.