Podcast / Who Back When 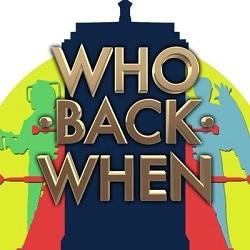 We're embarking on a voyage,
All through time and all through space.
Encountering Daleks, Thal, and Ood,
And the Cybertronic race.
Sontarans looked like 'taters,
And Silurians all had wonky scales,
And the Doctor has a TARDIS,
We're reviewing all his tales.
Who Back Whe~en
Reviewing all of Who there is.
Who Back Whe~en
Subscribe and rate on iTunes, please.
Episode by episode,
We're trudging down this temporal road.
Come join this on this odyssey,
What other choice could there be but
Who~o Ba~ack Whe~en?
Who Back When!
Advertisement:

is a podcast dedicated to reviewing the episodes of Doctor Who. It began with the intention of reviewing Classic Doctor Who, starting with the first episodes with William Hartnell. It has since broadened its scope to also include New Doctor Who, as well as the New Eighth Doctor Adventures of Big Finish Doctor Who.There has also been the occasional bonus episode focused on the most recent episodes of the moment, such as Peter Capaldi's debut as the Twelfth Doctor, the Peter Cushing movies (Dr. Who and the Daleks and Daleks' Invasion Earth: 2150 A.D.), or even an occasional Doctor Who comic book.

The show's primary host in every episode is Ponken. A number of co-hosts have joined him over the podcast's run. He started with Flapjack, who eventually left the show but has made an occasional appearance since. Doctor Who trivia master jD (a.k.a. MariusKane) primarily co-hosts the Big Finish audio book episodes and was the initial co-host for the New Who reviews. Later additions to the hosting cast include Nikulele, Rory "the Roarmeister", and Drew Back When (sometimes known as "the Drewd"), who have alternated between Classic and New Who reviews.

The typical formula for most episodes is a Mad Libs introduction beginning with "This is the one with..." and a description of what's to come. After that comes a "Bite Size Chunk of Who", or BISCOW for short. The majority of the episode is the hosts doing a synopsis of the Doctor Who story they're reviewing followed by their reviews and giving scores on a 0.0 to 5.0 system. After that they read aloud from reviews sent to them by listeners and close out the show.

On the 23rd of December 2015, the show celebrated its 100th episode. In that time they have gone through the entirety of William Hartnell's First Doctor, Christopher Eccleston's Ninth Doctor, two and a half seasons of Paul McGann's New Eighth Doctor Adventures, and the first thirds of Patrick Troughton's and David Tennant's runs as the Second and Tenth Doctors.