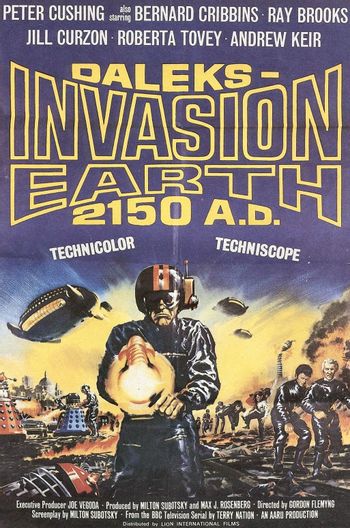 The one where Wilfred shows up a few decades early.
Advertisement:

Daleks' Invasion Earth: 2150 A.D. is the 1966 sequel to Dr. Who and the Daleks. The film follows in its predecessor's footsteps: Peter Cushing is Dr. Who, the Daleks are being nefarious and the whole thing is in colour!

Just as the first film was a remake of the TV story "The Daleks", this is a remake of the second Dalek story "The Dalek Invasion of Earth". In it, the Daleks have invaded Earth and are planning to excavate the core and turn the planet into a giant spaceship. Luckily, Dr. Who is on hand to save the day with help from his granddaughter Susan, his niece Louise, and a policeman named Tom Campbell.